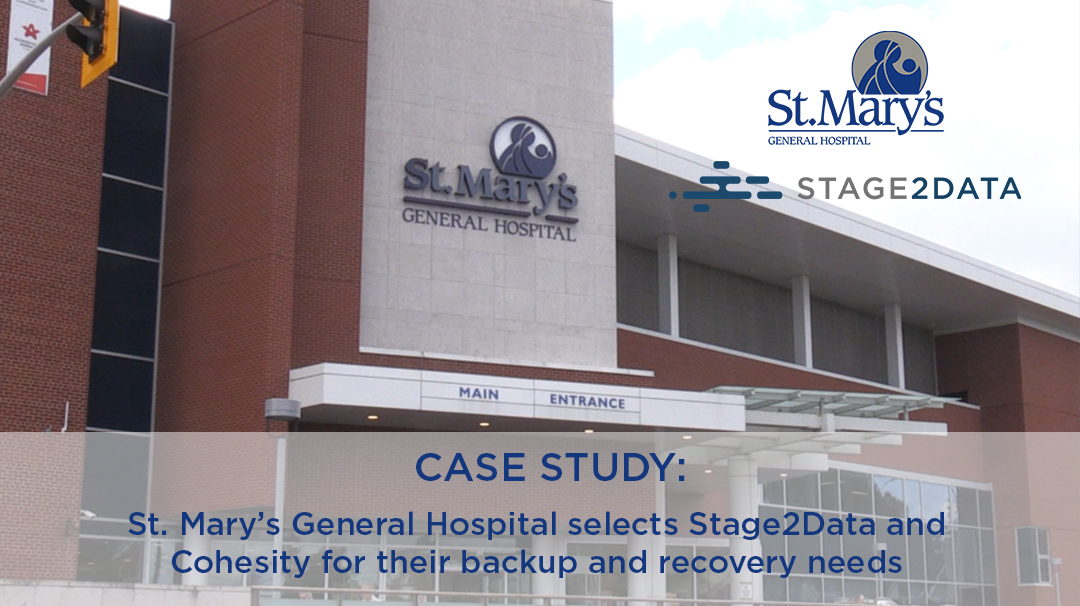 Located in the heart of Kitchener, Ontario, St. Mary’s General Hospital is the second-largest acute care hospital in the St. Joseph’s Health System and a Regional Cardiac Care Centre. The hospital proudly serves the residents of Waterloo, Wellington County with an extended reach to Dufferin, Grey-Bruce and beyond. St. Mary’s provides excellent, compassionate care to hundreds of thousands of patients and families in their core areas of clinical focus.

With its nearly 2 000 staff, physicians and volunteers, the healthcare provider currently backs up 96 to 100 terabytes of data to approximately 160 virtual machines and physical servers. Until recently, St. Mary’s made use of tape backups until a vendor of the hospital, who was using Stage2Data for their backup needs, referred the IT, Infrastructure and Information Security Manager to Jon Darling, Stage2Data’s Senior Account Manager.

A few months ago, the hospital experienced a cyber incident in the form of a virus attack that compromised the domain controllers, DNS and application servers. During the cyberattack, the hospital shut down their network and reached out to Stage2Data to help them to restore their environment from the backups. Because the healthcare provider was already using Cohesity at this time, the data was encrypted and easy to restore. The IT department opted not to restore the backup to the point of failure but instead restored the data from a recovery point three days prior to the incident in order to ensure they were not restoring any infected files on the impacted server. Stage2Data had the servers up and running in a few hours. Nevertheless, this incident prompted St Mary’s to also move their backup off-site in the event of a bigger disaster like a fire or flood.

St. Mary’s Hospital currently has on-prem backup combined with supplied space backup. Additionally, they have extended their contract with Stage2Data to also provide off-site backup and cloud-based storage to facilitate disaster recovery and in the event of a disaster or cyber-attack on their on-prem appliance.

“I’m a very happy customer with Stage2Data so much so that I am in the process of introducing Stage2Data to Grand River hospital as well. I am convinced that they can only benefit from the efficient service received from Stage2Data and their as-a-service solutions” says Imran Hussain, Integrated Manager, IT, Infrastructure and Information Security at Grand River Hospital and St. Mary’s General Hospital.

“Since we have upgraded to Cohesity through Stage2Data, we have peace of mind that our critical data is always available and recoverable. We now have a modern backup and recovery solution that can also extend to native cloud integration, file and objects, and security. Should any issue arise, the teams at Stage2Data, who are known for their rapid response, simply work with our engineers to resolve the issue within the hour” says Imran.